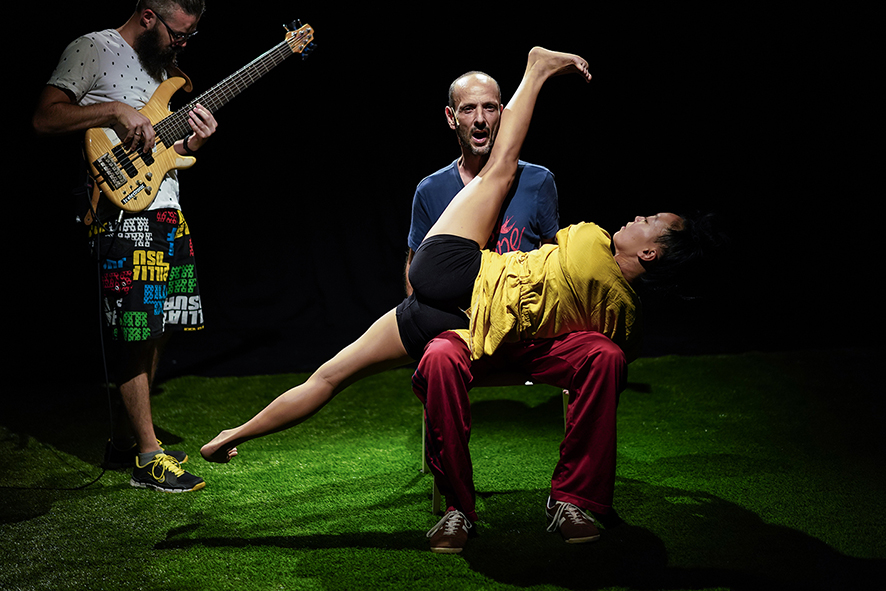 Over the past 30 years Nimrod Freed, in his unique movement language, has created interdisciplinary dance using a remarkable blend of dance, live music and theatre.  His creation, is personal, social, authentic, fearless, uncompromising, with high aesthetic values, that provides the audience with an exciting experience.

Nimrod is the Founder and Artistic Director the Tami Dance Company/Nimrod Freed, aided by the Steinmetz Family Foundation that chose to support the company for several years, to enrich cultural life in the community.  The company includes dancers, an actor, musicians and a designer.  Nimrod collaborates with wonderful musicians –Israel Breit, Shlomo Bar, Din Din Aviv – with whom he won the Habima National Theatre Artistic Duo prize.          Similarly, he has won other awards: Creativity Grants, Performances abroad grants  from the Israel Lottery Council for Culture and Art, the Foundation for the war on AIDS, and more. Nimrod creates and works together with dance companies around the world – in Tokyo with the virtuoso men's Dance Company KAYM; in Johannesburg with DANCE FORUM; in Australia – the QUT DANCERS; in Cyprus – DANCE LAB and in Spain - AGITART DANCE COMPANY.  For many years he has collaborated with designer Talia Freed, actor/dancer Itzik Gabbai and dancer/collaborator Noa Shavit.

Among the Choreographers' Association's founders: for the first two years he was the association's director.

He teaches at the Kibbutzim College's School of Dance Arts, and at the Jerusalem Academy of Music and Dance.  He holds an MA from Columbia University in New York.

Nimrod Freed began his professional career in the world of dance at the age of 16.  In 1970 he was selected by Lia Schubert to receive a full scholarship at the School of Dance she directed in Haifa, and to join her "Dancers' Stage” Dance Company , with which he first performed in the opera Samson and Delilah with the Philharmonic Orchestra conducted by Zubin Mehta at the Caesarea Amphitheatre, as part of the Israel Festival.

From 1982 – 1992 he lived and performed in New York City, where he had been invited by the well-known Japanese choreographer Kei Takei.  For five years he danced and performed in the "Kei Takei Moving Earth”Dance Company, with which he performed throughout the U.S. and Japan.  Similarly, he worked with Min Tanaka, among the fathers of Butoh dancing from Japan, and with Ellen Stewart – the La MaMa Theatre in New York.

Nimrod produced initially in New York City, 1985.  His works were performed there with great success -- Riverside Dance Festival, The Theatre of the Open Eye, Dia Art Foundation.  He won a Residency at the prestigious DTW Dance Centre in New York – under the artistic direction of the high priestess of dance, Bessie Schoenberg.

Nimrod Freed /Tami Dance Company celebrates 13 years since its founding.  The company was established in 2004 through the generous support of Daniela and Daniel Steinmetz – Tami House, central Tel Aviv community center for enrichment of community life and advancement of authentic Israeli culture.  Its unique approach deals with empowerment through techniques of release, concentration, physical fitness, voice and motion and improvisation- with joy.  Members of the company have worked together with Nimrod for many years.

The Company holds a broad variety of theatre – dance workshops in the community and for professionals: Delicious movement for children, youth and adults, from a highly varied assortment of populations.

The Nimrod Freed/Tami Dance Company performs in Israel and abroad, with the Company 's repertoire and international co-productions.  It is supported by the Ministry of Culture and Sport, the Culture Administration department of Dance, The Lottery Council for Culture and Art, the Foreign Ministry – the Division for Culture and Scientific Relations, Tami House Central Tel Aviv Community Center, Choreographers' Association

"…One of the most memorable and innovative dances I have seen in a while…" Dancing perfectly free  Wordpress.com

"…PeepDance has got an exceptionally big turn up of the audience because of its originality…Inventive…" The Day of Kaunas, Lithuania

"Do not miss" Timeout  Cyprus

"The most powerful performance of the festival" National T.V. Lisbon, Portugal

“Groundbreaking… innovative… moving… go see” Chaya Barel, kol Israel
“A love song for music” Tzipi Shohat, Haaretz
“A hot theatrical piece” Zvi Goren, Habama
“… high level performances… well done” Ora Brefman, Dancetalk
“Surprising movement solutions… there was a hypnotic dimension to the movement quality” Ruth Eshel, Haaretz
“Brilliantly executed” Zvi Goren, Habama
“Amusing and full of humor, flowing and full of color… worth seeing” Daniel Efrati, Makor Rishon
“Not your ordinary dance show… fascinating in every moment… one of the more fascinating and diverse in the Israeli dance scene…”
Alice Blitental, Tzfon Ha’ir
“The movement’s visual and symbolic texture is superb… the crowd was enthusiastic and the work was received
warmly… an interdisciplinary piece in which the combination of music and dance, acting and singing, manages to steer away from any compromise… full of mad humor” Giora Manor, Israel Dance
“A pearl of creativity, daring and freshness, and an excellent performance… like in some imaginary circus… a sensual and humoristic dance…
a catchy, creative, surprising and high quality show” Ruth Eshel, Haaretz